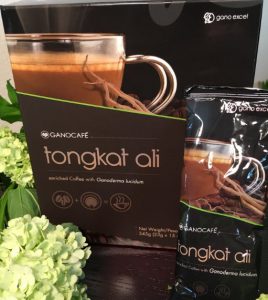 Enjoy Our Fine Arabica Coffee With Ginseng PLUS Experience the Health Benefits of Ganoderma.

This coffee is called Gano Cafe Tongkat Ali, and it’s an exotic balance of coffee, Ganoderma extract, Ginseng extract, Eurycoma Longifolia Jack (also known as Tongkat Ali), non-dairy creamer, and sugar. It is the perfect cup of coffee… and full of healthy benefits and invigorating herbs! Buy a box now so you can enjoy a cup of Ganocafe Ginseng soon.

And here’s one more great thing about it — Gano Cafe Tongkat Ali allows you to continue to savor the full-bodied flavor you expect in a premium coffee, and feel invigorated, without the possible harsh side-effects of “quitting” coffee or sacrificing the taste you expect and love.

It is a plant that enjoys two folk names. One is Tongkat ali, which means Ali’s walking stick. The other is longjack. By any name, Tongkat ali (Eurycoma longifolia) is a sex-boosting dynamo of a plant that has proven its sexual benefits in both animal and human studies.

Tongkat Ali is a slender tree native to Malaysia, lower Burma, Thailand, and Indonesia. The root is employed as a traditional remedy for the treatment of malaria, high blood pressure, fevers, fatigue, loss of sexual desire, and impotence. In Malaysia, Tongkat ali is the object of a sexual potency craze, an ingredient found in over three hundred products, from herbal syrups to capsules to popular soft drinks. Tongkat ali is everywhere, driving the lusty engine of steamy, equatorial Southeast Asia.

I will travel pretty much anywhere to research a valuable medicinal plant, especially a bona fide aphrodisiac plant. In the instance of Tongkat ali, the trail led me to the Malaysian peninsula, in a spectacular rainforest one million years old, to witness the harvesting of a root that is legendary among the peoples of Southeast Asia. Nobody knows how long Tongkat ali has been employed for medicinal purposes, but its documented use dates back to the 1700’s. In the steaming hot rainforest, I watched four aboriginal Orang Asli natives hack a large Tongkat ali root from the ground, using only simple hand tools. I marvelled at the hard labor often involved in harvesting plants for the herbal market.

The Big Testosterone Builder
Tongkat ali root contains a plethora of beneficial compounds, including potent protective antioxidants which inhibit cellular aging. Other phytochemicals in Tongkat ali demonstrate anti-viral, anti-malarial, and anti-cancer activity. Others combat high blood pressure, and quell dysentery. The root is a natural medicine chest. But what excites most people about Tongkat ali is that the root significantly boosts sex drive and function, in both men and women, by building testosterone. Agents identified as glycoproteins are believed to be the sex-promoting ingredients in the plant.

The foundation studies conducted on Tongkat ali have been undertaken by former University Of Malaysia Professor Dr. Johari Saad PhD, who is called by many the King Of Tongkat ali. Dr Johari found that when given a standardized Tongkat ali extract containing 22% glycoproteins, animals copulate three to four times more frequently than normal. This is because testosterone levels in animals given Tongkat ali increase three to four times on average, an astounding increase in the sex hormone most closely associated with libido.

The Sex Doctor
At the Human Reproduction Specialist Center in Kuala Lumpur, I met with Dr Ismail Tambi MD, one of the foremost experts on reproductive and sexual health in all of Southeast Asia. He is also the leading medical expert on the effects of standardized Tongkat ali root extract on human subjects. In his work with men, Dr Tamby has found that use of Tongkat ali extract significantly increases testosterone production. “In our work with men, we found that Tongkat ali extract increased the serum level of testosterone considerably.” I asked Dr Tamby if the men experienced renewed sexual vitality, or heightened sexual desire. “Oh, yes, most definitely. The men found that Tongkat ali boosted their sex drive quite a lot. I think that for low libido, Tongkat ali extract is very valuable. I have seen this result for myself, and can say that this plant really works.” I asked Dr Tamby if the same would apply to women. “Yes, certainly it would boost libido in women as well, as testosterone is essential to a woman’s sexual desire.”

Dr. Tamby conducted a study of thirty adult males of various ages, assessed their testosterone levels, and then gave them 100 mg of standardized tongkat ali extract daily. The testosterone levels of all the subjects rose, from somewhat to a lot, depending on age. Dr Tamby’s study resulted in a 91% improvement in libido, a reported 73% improvement in sexual function, and an 82% psychological improvement relative to sex among the men who participated in the study. His work shows that Tongkat ali can re-elevate the level of this important sex hormone. In this regard, Tongkat ali proves a true sexual fountain of youth.

Using The Root
Tongkat ali significantly boosts sex drive in men and women, and has a long history of use enhancing sexual function in men. The top Tongkat ali experts in Malaysia recommend that men consume about 100 – 200 mg of Tongkat ali extract daily, and women about 50 – 100 mg. This is a remarkably effective herb with a very bright future.

We have a blend of Tongkat Ali and Ganoderma available in a very potent and effective capsule, and we call it Sakanno. It works great – I can personally recommend it!  Buy Tongkat Ali in Capsule Form.